Announcing the 5th annual Zappafest where local bands get together and perform nothing but Frank Zappa tunes. This year's line up includes "Dr. Chow's Love Medicine", "Dog Feud" and "Dupree's Paradise".

More info from Fly, after I asked him:

I don't know what to tell you besides that once a year, we gather together to play tribute to Zappa.

These bands don't play him much, or at all, the rest of the year. The band I play guitar with is "Dr. Chow's Love Medicine".  Others this year include "Dupree's Paradise" and "Dog Feud".  Also playing will be Mark Shurilla and "Wowie Zowie".  Mark usually plays the music of Buddy Holly and Roy Orberson during the summer to make money and also performs as "McTavish" doing Irish Rock.  He is also in "The Electric Assholes", or "the Blackholes" when they have to censor their name, doing polka punk.  I do not think any of us has a web site.  I am not the organizer but have played every year with Dr. Chow.  The guy who does put it together is Jeff Platt.

But, as I said, one night a year, next Saturday the 11th, we will be only doing Zappa.

This year, we'll be at Stonefly, the brewpub formerly known at Onopa, at 735 E. Center Street in Riverwest, Milwaukee. Our annual music event, features the musical madness and mayhem of Frank Zappa.
Right now, we've got Dr. Chow's Love Medicine and The Spiders of Destiny confirmed.

The Spiders of Destiny feature Dixon Bols on lead guitar & Mr. Poopy, bass & vocals, from the Fun-ka-trons; David Darsh, keys & vocals, ex-Wild Kingdom; Danny Dinky, drums, ex- Shinola; Greasy Guido, guitar, from Drunk from Beer, and introducing the soon to be infamous Chestica Air-on of 5 Star Hangover on lead vocals and madness. They will be doing their versions of "Mr. Green Genes", "Lucille Has Messed My Mind Up", and "Let's Make the Water Turn Black". They plan to do "Magic Fingers", "Sharleena", "My Guitar Wants to Kill your Mama", and hope to do "Love of My Life", "Muffin Man", and "Chunga's Revenge". Other surprises are being planned from Spiders of Destiny...

Visit www.sudswineandspirits.com for more info as we get it !! 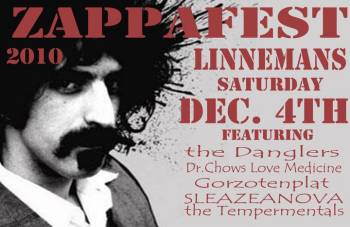