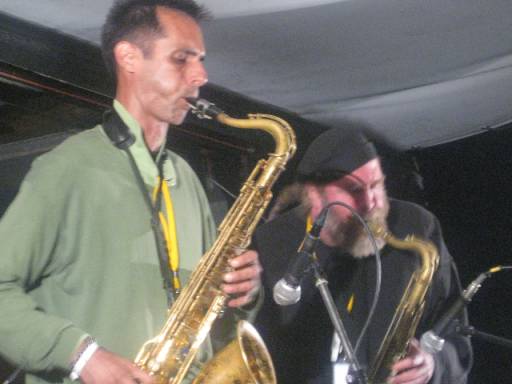 Stanley Jason Zappa was a special guest at the 2008 edition of the Zappanale festival in Bad Doberan, Germany.

Together with Jeffrey Helwig (drums), Matthew Freed (bass) and Jacob Hall (bass), Stanley Jason Zappa is Sistemazione. They have recorded an album called "The Kings Of Dispassion", but it hasn't been released yet.

The picture on the right was taken by Kilissa Cissoko at the Zappanale Festival at 2 a.m., late on Saturday night (or very early on Sunday morning): Stanley Jason Zappa and Elliott Levin got on stage for some high enerygy free jazz.

November 2009, Stanley Jason Zappa, Sabir Mateen and Matt Lavelle recorded a session for WKCR radio. SJZ says: "When asked what the groups name was, I offered The Self Organized Clarinet Trio."

May 2013, Stanley Jason Zappa performed with Project/Object during their Jew Jersey gig.

The Leonard, Skrowaczewski, Zappa album, "Visions", can be ordered through cdbaby.

UniMuta: Did you know of the Zappanale festival before you got invited? How did the Arf Society convince you to participate? & how does it feel to take part in a festival that carries your last name?

SJZ (Stanley Jason Zappa): I've known of the festival for a long time, though I can't recall exactly how I first heard about it.  Michel Deville sent me a CD of the Wrong Object's performance at Zappanale 15, so I certainly knew about it by then.
The Arf Society didn't do very much in the way of convincing me to go--The convincing was done by that silver tongued Michel Deville, rising fuel and travel prices and the (then) possibility that Zappanale #19 might be the last.  The Arf Society made it possible for me to be at the festival, and did all the leg work in terms of travel arrangements--which is very kind of them.

I am keenly aware if my last name was different--Skrowaczeski for example--there might not be the same enthusiasm and available capital to have me make music at the festival.  Yes...that is certainly front and center most of the time in all situations, musical or otherwise.  There is a 'bittersweetness' to Zappanale, which I suppose is an improvement over the usual bitterness.
I am also keenly aware that "winners always cheat, and cheaters always win."  Even if it isn't by dint of my sound and work obtaining it, a trip to Europe is a trip to Europe.  You don't get those every day--I don't anyway, so who am I to complain?

UniMuta: What does music mean to you? Is it something that you can do / would like to do full-time?

SJZ: Music is, in the words of the late Dr. Albert Hoffman, "my problem child."  Maybe I'm wrong, but sometimes I feel like life would be a little easier, a little simpler if I was as passionate about accounting or plumbing as I am about music--specifically improvised music.
Is it something I "can" do full time?  I guess that depends on what you mean by "can."  Are you asking if I am physically able to play the horn all day or if there is there an economy to support my habit of playing the horn all day?
I think it would be swell if I could make the same low wage playing the horn as easily and regularly as I do performing other menial tasks for other people's profit.  (Talk about aiming low.)  As a plus, it would be nice if I didn't have to get into an airplane to do it.
Obviously a more shangri-la version would be one where all expenses (all of them) were taken care of by someone else while I did my thing.  I kind of got a tiny whiff of that while at Bennington College on the meal plan, playing in ensembles, no rent (up front, anyway).  That kind of a thing.
Too bad that war is so darn expensive.

UniMuta: You have one album out. Do you have other releases scheduled? Do you play concerts often?

SJZ: I do not have any other releases scheduled.  I don't play concerts often.  I'm not bragging or complaining about that--it's never been any other way and yet somehow I'm still interested in music.

SJZ: Michel Deville and I had been in contact via the email.  I was very taken by Fred Delplancq's and Jean Paul Estievenart's playing.  The whole band is great, but as a horn player, they made an especially deep impression.   That, combined with the above mentioned factors seemed like enough reason to try and make it so.

UniMuta: Can you tell me a bit about the "The New Texture Pantonal Fellowship" - project that is scheduled to appear at the festival on Sunday? Is this you with Nick Skrowaczewksi, plus some guest musicians?

SJZ: Hopefully it won't be one of those situations where it's more rewarding for me than for the musicians or audience--though I can't imagine how it will be anything but that.  It's rare to be availed a large ensemble to "make it so", to "do my will"--and I am very excited to have that opportunity.  At least I'm excited to think I have that opportunity.  The LBRK from Portugal, the Wrong Object and some musicians from the FZTB all said they would participate.  Maybe they will change their minds after the rehearsal.  Hopefully not.

My will is to create sounds and sound happenings.  Songs and forms and the artful transitions from one thing to the next really are secondary for me.  What is primary is creating sonic (in this case, large, loud, pan tonal sonic environments) to my specifications.
For this piece, my specifications include no "down beat" or "symmetric time" but instead an alternating between a diffuse spray of total group percussion and austere solo percussion statements.  Another specification is that the more "in-between notes" (i.e. quartertones and microtones) the better.  Improvisation with also be a key element.

Certainly tonality is out the door--Bach will be given his due in Hamburg earlier in the week, so we'll be free to focus on some other things.